A: At this time, your only option is to scour used game resellers for a copy of the original DOS release. Alternatively, you can use the one episode shareware version which is available from 3D Realms for free. While the source code to Duke Nukem 3D has been released to the public under the GNU General Public License, the game's content (artwork, sounds, maps, et cetera) remains a commercial product. DO NOT post anywhere or ask anybody at all about where to acquire this game illegally. Support 3D Realms for making the most awesome game ever and don't be a pirate, yarrr! 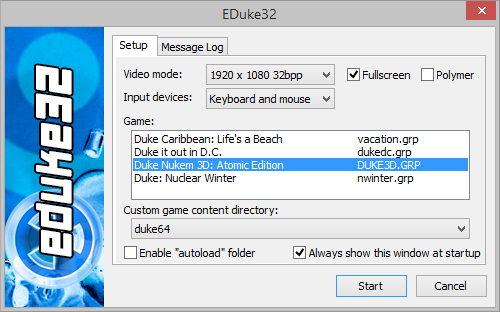 Q: How do I play Duke Nukem 3D's various add-ons, like Duke It Out in DC, Life's a Beach, Nuclear Winter, etc?

Q: What are the checksums, sizes, and timestamps for the various files that EDuke32 can use?

Q: Where do I purchase Shadow Warrior?

Q: How do I play Shadow Warrior and its two expansions: Wanton Destruction and Twin Dragon?

A: Download Eduke32 via the Synthesis builds, which now include the program "VoidSW", the new Eduke32-based sourceport for Shadow Warrior and its two mission packs:

Q: How do I enable Shadow Warrior's CD Music?

A: Do the following: